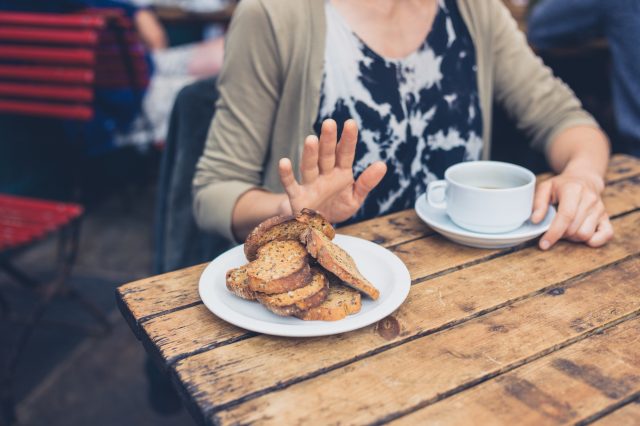 People with type 1 diabetes are significantly more likely to have celiac disease, a challenging autoimmune condition that prevents the proper digestion and absorption of gluten.

Celiac disease is rare in the general population–about 1 in 133 Americans are estimated to have the condition. But people with celiac disease may be 10 times as likely to have type 1 diabetes.

What Is Celiac Disease?

When people with celiac disease eat products containing gluten, their immune system responds by attacking the gluten, which quickly causes gastrointestinal distress. The autoimmune attack also results in damage to the small intestine, which can inhibit the body’s ability to absorb nutrients properly and lead to worsening complications, such as malnutrition. In children, this can lead to stunted growth.

The incidence of celiac disease is “steadily increasing” in many Western countries, possibly due to improved techniques for diagnosis and rising awareness. Still, only a minority of people with celiac disease have received an official diagnosis.

The most common symptoms of celiac disease include gastrointestinal pain and discomfort, including diarrhea, bloating, constipation, nausea, and vomiting. Many people with celiac disease also suffer from a very wide range of “non-classical” symptoms that are apparently unrelated to digestion, including anemia, fatigue, migraine headaches, dermatitis, and many others. And patients with “silent” celiac disease report that they have no symptoms at all, although in reality, they may be experiencing mild but pernicious effects.

Celiac disease is a lifelong condition, but most damage can be healed and further symptoms avoided with proper treatment–that is, a strict gluten-free diet.

How Is Celiac Disease Diagnosed?

According to Beyond Celiac, most doctors will order one or more blood tests to detect autoantibodies that are associated with celiac disease, similar to the autoantibody panel used to diagnose type 1 diabetes.

Some doctors will choose to confirm a diagnosis with the use of an endoscopy to take a biopsy of the small intestine lining. Genetic tests may also be called for.

Because celiac disease can present such a bewildering array of symptoms, experts strongly caution against any attempt at self-diagnosis. Many people these days prefer a gluten-free diet, but they may or may not have celiac disease. Some have a condition that doctors now call non-celiac gluten sensitivity, although there is no consensus on its precise nature.

What Is the Connection Between Diabetes and Celiac Disease?

Type 1 diabetes and celiac disease are both autoimmune diseases.

Like type 1 diabetes, the exact cause of celiac disease is unknown. Both are believed to involve a combination of genetic factors and environmental triggers, and the frequency with which they occur in the same patients suggests unidentified deeper connections between the two conditions.

Since co-existence is so common, some experts have recommended that all patients with type 1 diabetes, especially children, should be screened for celiac disease.

It is also possible that undiagnosed celiac disease in people with type 1 diabetes can also make blood sugar management more difficult, even if it does not result in noticeable gastrointestinal distress. An article in Today’s Dietitian by certified diabetes educator Karen Meadows, for example, suggests that celiac disease can prompt unpredictable carbohydrate absorption, leading to unexplained blood sugar fluctuations.

While celiac disease can be an extremely frustrating diagnosis, its treatment is comparatively simple: patients must adhere strictly to a gluten-free diet. That means eliminating all food products made from wheat, barley, and rye, in addition to sneaky sources like soy sauce, vitamin supplements, and even lipstick.

There is little doubt that living with these two separate conditions, each of which requires dietary changes and mindful eating, will take unusual self-control to thrive.

Luckily, a gluten-free diet has significant overlap with the low-carbohydrate diets that many people with type 1 diabetes already prefer. Patients that choose to eliminate wheat, flour, and other gluten-containing ingredients will very likely enjoy improved blood sugar control as a result. That’s because most products containing gluten are high in carbohydrates, and therefore create glycemic management challenges for diners with diabetes. It stands to reason that a gluten-free diet adopted for the treatment of celiac disease will also result in improved diabetes management and better diabetes outcomes.

If you have only recently been diagnosed with celiac disease, it may take months or even years for your intestinal health to recover, even if you adhere closely to a gluten-free diet. During that time, it’s possible for uneven nutrient absorption to continue to create glucose management challenges. A 2002 review concluded that “it seems likely that a malabsorptive disease could create opportunity for hypoglycemia in diabetes, particularly in patients under tight control… it also seems prudent to closely monitor insulin needs and blood glucose control during the early phase of instituting a gluten-free diet.”

Although patients with celiac disease can eat rice, corn, potatoes, and other gluten-free starches safely, some might find a benefit to switching to lower-carbohydrate alternatives, such as baked goods using almond or coconut flours. There are many gluten-free snacks and processed foods available in the marketplace today, but many of them are very high in sugar and other refined carbohydrates, and comparatively low in protein and fiber, foods that are likely to lead to further glucose management issues, as pointed out by dietitian Karen Meadows. A diet emphasizing whole and minimally processed ingredients, including plenty of vegetables and healthy protein sources, is likely to be better for both celiac disease and type 1 diabetes.

If you have both conditions, you should work with your medical team to find an eating plan that will work for both your celiac disease and type 1 diabetes. A well-designed diet should be able to help treat both conditions at once.