Verapamil, a widely-used hypertension drug, may help adults with newly-diagnosed diabetes preserve their natural ability to secrete insulin. A new study has advanced an explanation for how the medication works to protect the beta cells from immune system attacks.

Unlike many other potential diabetes drug therapies, this one doesn’t necessarily have to go through years of development before patients gain access, though many experts would prefer to see more data. Verapamil is widely available and typically well-tolerated, and the lead researcher suggested to Diabetes Daily that patients could ask their doctors about using it off-label right away:

“Our hope is that more physicians will see it and decide to use verapamil off-label.”

Although the preliminary data is encouraging, verapamil’s effects have only been confirmed in a single laboratory and in a very small number of patients, which may lead to some skepticism about its use in patients today.

The new study, led by the University of Alabama’s Dr. Anath Shalev, was published in the latest edition of the journal Nature Communications. It was accompanied by an article from the UAB’s news service.

We spoke to Dr. Shalev about the implications of her work.

The Possible Clinical Effects of Verapamil

This trial examined the drug’s effects in a mere 11 adults (ages 18-44), all of whom had been diagnosed with type 1 diabetes within the previous 3 months. All study participants, including 13 other patients randomly selected to receive a placebo, also retained at least some minimal ability to secrete insulin, as assessed by a stimulated c-peptide of ≥0.2 nmol/L. Some of the major effects are shown in the following images: 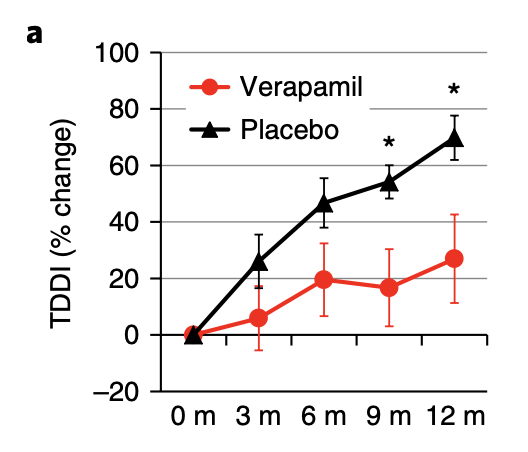 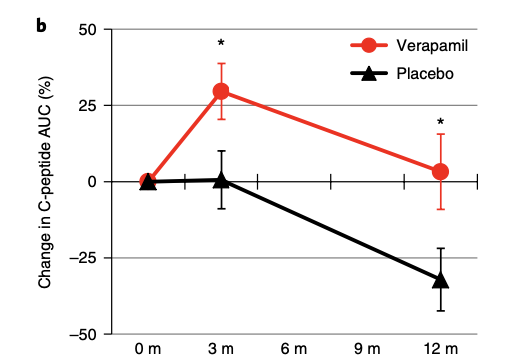 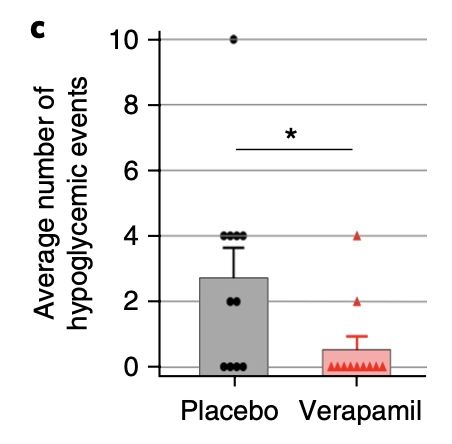 The use of verapamil was not associated with improvements in A1C or time-in-range.

Dr. Shalev, observing her own work, believes that verapamil “seems to delay the progression of the disease.”

It’s worth keeping in mind that most experts will likely prefer to see the effects confirmed in larger randomized controlled studies and in a more diverse population. The results above only represent the experience of 11 males in a single laboratory—it would likely be wrong to interpret them as reliable or definitive.

But what could two or more years of slower diabetes progression mean for patients? It might lead to impressive long-term health gains.

We know that a robust honeymoon phase, for example, “is associated with reduced prevalence of long-term complications.” Even a small amount of natural insulin production is strongly associated with better health outcomes; in a study of Joslin gold medalists, the longest-lived type 1 diabetes patients identified by scientists, some were found to have measurable natural insulin production even 50 years after diagnosis with type 1, suggesting that residual insulin production may be a key to longevity. And lucky patients with higher levels of beta cell activity also enjoy improved blood sugar control and reduced risk of hypoglycemia, presumably leading both to better health and higher quality of life.

The newer study, which was described as “exploratory,” was primarily an effort to look in extreme detail at exactly what verapamil is doing and why it works.

Dr. Shalev has been working on this potential therapy for a long time. In 2002, she first examined the behavior of the gene TXNIP, later identifying it as “a major factor regulating pancreatic beta cell dysfunction and death.” Years of experiments revealed that the progression of diabetes in rodents could be accelerated or halted by changing the amount of TXNIP in their beta cells. A later breakthrough found that verapamil reduced TXNIP levels within the pancreas.

The present study happily confirmed that verapamil inhibits TXNIP expression in the pancreatic islet cells in humans, just as predicted. You can find more details about Dr. Shalev’s decades of persistent progress in this 2018 profile.

The team at UAB also learned that verapamil didn’t just preserve the beta cells. The treatment also reduced levels of a protein named chromogranin A, an autoantigen that helps trigger the autoimmune attack that defines type 1 diabetes. Analysis of proinflammatory markers also suggested that the activity of certain types of T-cells had also declined to healthy levels. In short, the drug helped quell the autoimmune dysfunction characteristic of type 1, an effect that Dr. Shalev described to me as a “surprise.”

Off-Label Use for New Patients

This article should not be considered medical advice, and Diabetes Daily cannot recommend in favor of or against the use of verapamil in any patient with type 1 diabetes. If you have an interest in this treatment, please discuss it with a fully qualified medical professional.

I asked Dr. Shalev what she would say to readers that are eager to try the medication immediately:

“Patients should discuss it with their doctor, absolutely.”

“I think this has to be decided by the treating physician, just to make sure there are no contraindications to taking verapamil. Exclude those, and then I think that it’s really between the doctor and the patient to start doing it. I’ve had several physicians contact me for dosing advice, and I’ve had good success with it on an anecdotal basis.”

Other experts believe that there isn’t yet enough evidence. Dr. Carla Greenbaum, who directs Seattle’s Benaroya Research Institute Diabetes Program, told me that “the trial that the new data is based on was interesting, but further trials are needed before recommending use in clinical practice.”

Doctors may be understandably hesitant to recommend off-label use for patients with type 1 diabetes. While verapamil is generally considered to be safe and well-tolerated, Dr. Shalev’s work remains fairly preliminary.

It is also important to note that verapamil must be administered indefinitely to confer a permanent benefit. In Dr. Shalev’s 2022 study, subjects who stopped taking the pill after one year saw the benefits rapidly disappear. In the following graph, the blue line labeled “Disc V” represents patients that took verapamil for one year and then stopped. You can see that their daily insulin dose rapidly caught up to those in the placebo group that never took verapamil to begin with: 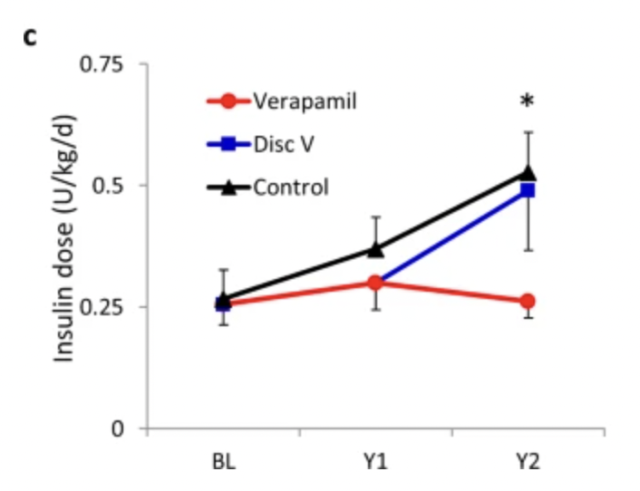 There’s no telling how long patients might continue to benefit from verapamil, as the new trial was only designed to evaluate two years of data.

Could Verapamil Work in Other Populations, Too?

Dr. Shalev is optimistic that verapamil will prove to be a useful therapy for many, including populations in which it has not yet been tested. She told me that she believed that the drug would not only work in patients with recently-diagnosed type 1, but in any patient with any measurable beta cell function:

“It matters not so much how long they’ve had diabetes, but more how many beta cells are still there. I would speculate, and it’s really speculation at this point, that if there is any remaining endogenous insulin production, I believe [verapamil] may help.”

To evaluate whether or not a patient has remaining natural insulin production, Dr. Shalev recommends a non-fasting c-peptide test, to see how the beta cells respond after a meal has provoked a greater need for insulin. She also recommended that doctors could evaluate the efficacy of treatment by tracking changes in a patient’s chromogranin A (CHGA), which was seen to rise in study participants that used verapamil, suggesting treatment success.

If the therapy truly does delay the progression of the disease, it could be useful in another patient group: those with presymptomatic type 1 diabetes. This condition, also variously called “at risk” or “subclinical type 1,” refers to people that have the autoantibodies characteristic of type 1 diabetes but have not yet developed the symptoms of hyperglycemia.

Dr. Shalev believes “that might be the population with the most to benefit. We would have loved to do that study, but we haven’t been able to convince people to do it, unfortunately. In at risk subjects, a large majority of beta cell function is still intact, and you could prevent the onset. We think that would be a very good indication.”

In recent years, the diabetes community has been excited by the progress of teplizumab, a different drug treatment for presymptomatic type 1 that is currently under review at the FDA. If the medical authorities ever agree on a validated treatment for these patients, it could dramatically change the landscape by providing a major reason to screen children for autoantibodies.

The Future of Verapamil and Type 1 Diabetes

There are now two larger studies of verapamil that we can look forward to. One, conducted in multiple sites across Europe, will test over 100 adults with new onset type 1 diabetes, primarily to see if those using verapamil for an entire year have enhanced endogenous insulin production after a meal; it is still recruiting. The other, which has already begun, has enrolled about 100 American youths with newly-diagnosed type 1 and will evaluate verapamil in conjunction with a closed-loop insulin pump system.

While these trials could prove pivotal in making the case for or against verapamil as a therapy for patients with type 1 diabetes, they will not lead to federal approval of verapamil as a diabetes therapy. Because verapamil is already available as an inexpensive generic, Dr. Shalev told me, researchers will probably never be able to run the type of expensive trials that the FDA requires before officially approving new uses for established drugs.

“I’m not sure when or if it will ever be reassigned as a drug for diabetes, because there’s no lobby for it.”