A new report from the Centers for Disease Control and Prevention (CDC) shows that the rate of gestational diabetes in the United States has positively exploded in recent years. Some of that gain is likely associated with the COVID-19 pandemic – which has also sent cases of both type 1 and type 2 diabetes skyrocketing – but the strong upward trend was already evident in previous years, before the novel coronavirus had infected its first victim.

The report examines five years of data, beginning in 2016 and ending in 2020, the first year of the pandemic. The rate of gestational diabetes (GDM) peaked in 2020 at 7.8 per 100 births, a remarkable increase of 30 percent from 2016. And while the jump from 2019 to 2020 was the largest year-to-year change in the sample, most of the overall increase occurred between 2016 and 2019, during which GDM rates increased by about 5 percent annually. 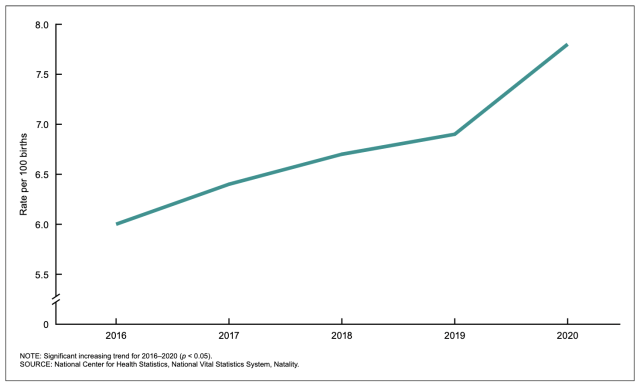 GDM rates, from the CDC report.

Gestational diabetes occurs when a pregnant woman’s body cannot process glucose effectively. The placental hormones, especially towards the end of pregnancy, almost invariably cause some measure of insulin resistance. This is a healthy change for most, but the bodies of some pregnant women cannot properly adjust to the change. The resulting high blood sugar, or hyperglycemia, can be detrimental to both mother and child.

The condition, which is usually identified between weeks 24 and 28 of pregnancy, is managed in much the same way as type 1 and type 2 diabetes are, with diet, exercise, and glucose-lowering medications including insulin. GDM is associated with a range of pregnancy complications and long-term issues for both mother and child, although many women with the diagnosis enjoy perfectly healthy pregnancies and give birth to perfectly healthy babies.

Gestational diabetes rates vary by race and ethnicity. Asian women in America have the highest rate of GDM (14.9 percent in 2020), while Black women have the lowest (6.5 percent).

GDM Rates on the Rise

Gestational diabetes rates have been rising for decades. Although it’s not exactly clear why GDM has become so much more common, the increases are likely explained, at least in part, by the rising prevalence of known GDM risk factors. The two biggest might be maternal age and maternal obesity:

GDM is highly correlated with maternal age. The CDC study found that women under the age of 20 have a GDM rate of only 2.5 percent, but women over the age of 39 have a rate of 15.3 percent. American women are having children, on average, at older ages than ever before.

But that alone doesn’t account for the increase in gestational diabetes. GDM rates within every age bracket increased between 2016 and 2020. In fact, the greatest increase was among women ages 20-24.

Heavier women are more likely to develop gestational diabetes. The CDC study found that fewer than five percent of women of normal weight (or below) develop GDM. Among pregnant women with obesity, that number is 12.6 percent. Sadly, obesity rates in America (and throughout the world) have been increasing for generations, a trend that affects women of child-bearing age too.

The CDC report declines to speculate on the impact of the COVID-19 pandemic on gestational diabetes, but it seems likely to emerge as a major factor explaining the big leap in rates from 2019 and 2020.

Fear of the infection and efforts to mitigate disease spread created lifestyle changes for the average American that may have due helped cause the increase of GDM. People spent much more sedentary time and ate less healthy food during the pandemic, changes that may have exacerbated known GMD risk factors. Both sedentary behaviors and poor diet quality are associated with a greater risk of gestational diabetes.

Pandemic stress might also have contributed to rising GDM rates. Anxiety and depression have been identified as causes of GDM. One journal article that examined Northern Italian women that gave birth during the spring of 2020 – in the months after that region became a global COVID-19 hotspot necessitating stringent lockdowns – found that GDM prevalence rose, especially among those that experienced lockdown during the first trimester. The researchers concluded that “it is plausible that exposure to stressful events during pregnancy causes chronic inflammation and, therefore, results in a higher risk of GDM.”

Gestational diabetes has been on the rise for decades in the United States. The trend may be largely explained by increases in a variety of GDM risk factors, including maternal age, maternal obesity, and sedentary behavior.

The rise in GDM appears to have accelerated significantly during 2020, likely due to the impact of the COVID-19 pandemic. Pregnant women, just like the rest of us, dealt with increased rates of stress and anxiety and experienced significant declines in both diet quality and exercise frequency. All of these changes have the potential to increase the risk of developing GDM.

We can’t know what the 2021 data will look like yet. Many parts of the country substantially eased lockdowns and distancing recommendations, which may have helped improve some of the stress and negative lifestyle factors that were such a big story in 2020. But if the coronavirus itself has helped cause GDM, the numbers might be even higher, given that an immense percentage of the country got infected in 2021.

Gestational diabetes is associated with a variety of negative health outcomes, but it is possible to prevent or manage through diet, exercise, and judicious use of prescribed medications. If you’re concerned about yourself or a family member, please speak to your doctor.